1MCB Chambers is extremely proud to have won the Outstanding Set for Diversity and Inclusion award at the Chambers UK Bar Awards 2021.

We dedicate this award to Len Woodley QC, our Head of Chambers from 1988 to 2000 and the first African Caribbean barrister to become Queen’s Counsel. Len’s professional life reflected a catalogue of high profile trials in the late twentieth century – the riots in Notting Hill, Tottenham and Brixton, to name a few. In 1970, Len appeared for a defendant in the famous Mangrove 9 trial, in which a group of black activists was accused of inciting a riot at a protest against the police targeting of The Mangrove, a Caribbean restaurant in Notting Hill. The trial became the first judicial acknowledgement of behaviour motivated by racial hatred within the Metropolitan Police. The trial was recently dramatised in one of the Oscar winning director Steve McQueen’s mini films in the series ‘Small Axe’ in which, very regrettably, Len was played by a white actor. Passionate about ensuring that the Bar reflects the diversity of the communities it serves, Len would have been immensely proud of this award.

Nowadays, 1MCB Chambers is one of the most diverse sets at the Bar. We are firmly committed to attracting – and retaining – women, black and ethnic minority staff and barristers, people who identify as LGBT+ and individuals with disabilities, through initiatives such as a funded mini pupillage scheme which targets able students from non-traditional backgrounds, our diversity mentoring scheme, and innovative policies designed to support those who are unable to work full time owing to caring responsibilities or disability. At 1MCB, diversity and inclusion are not just boxes to tick: they lie at the heart of who we are and what we stand for.

As we celebrate our achievements, so too we acknowledge that there is much still to be done to promote inclusion within our profession. For example, a recent report by the Bar Council’s race working group highlighted that a black female junior barrister with the same level of experience as a white male junior bills £18,700 a year less on average, and an Asian woman £16,400 less, and black and Asian women at the Bar are four times more likely to experience bullying and harassment at work than white men. In 2021, there are still only five black female QCs and 17 black male QCs – compared with 286 white women QCs and 1,303 white men who have taken Silk. The profession also continues to haemorrhage talented women barristers, which has a significant knock on effect on the diversity of the judiciary, with women representing just 26% of the judiciary in the higher courts. Until black and ethnic minority counsel are no longer mistaken for defendants at court; until no woman barrister dreads sharing news of her pregnancy for fear of the detrimental effect on her practice; until every court building in the country has a working lift – we at 1MCB Chambers will strive to continue to be agents for change. 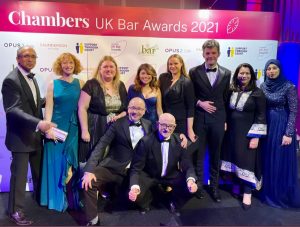