1MCB Chambers (including members from our days at 8KBW) would like to pay tribute to the life of Len Woodley QC, who passed away on Sunday 19th January 2020.

Chambers owes much of its present character to the leadership of Len Woodley QC, who was head of chambers for the twelve years from 1988 to 2000. Len’s genius was to be radical without being showy. His achievement was to be one of the first black barristers to be Queen’s Counsel, Recorder and Bencher of the Inner Temple, while retaining complete integrity and devotion to the service of his clients and fellow members of chambers.

Throughout his long career at the Bar, specialising in crime, he appeared in trials with a political or civil liberties element, including the Brixton riots trials and the Mangrove Nine trial. He was instructed in the Scarman inquiry (into the 1981 Brixton riots), chaired the Laudat inquiry into mental health, and sat on the Royal Commission on long term care for the elderly. He was also a member of the Bar of Trinidad and Tobago.

Len was very much aware of others’ struggles. In 1988, he invited Nelson Mandela, who was then serving a life sentence, to be an honorary door tenant of Chambers, as a mark of solidarity with the South African freedom struggle. He endowed the Leonard Woodley Scholarship at the Inner Temple, to be given to black or Asian pupils with a view to promoting greater diversity at the Bar. He was also a patron of the children’s rights charity, Plan International UK.

Len always had a tennis racket (or several) close at hand and closely followed both tennis and cricket. He was a quiet man who enjoyed opera.  He had an eye for the interesting without being showy – perhaps displayed by his owning a green convertible Audi (the first in the UK) which he cared for for twenty years (with maybe 15,000 miles on the clock).

As a Recorder sitting in the Crown Court, Len was always loathe to send anyone to prison, and would always opt for a non custodial option if he possibly could – so much so that he eventually upset the Establishment so much that he was written to by the Lord Chancellor’s department and reminded of his public duty, and asked if he really wanted to do this job. Needless to say, Len ignored what he interpreted as a veiled threat and carried on showing compassion  whenever he sat. 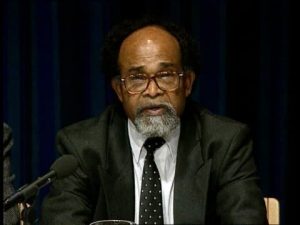