The defendant had been released from prison on licence after serving a sentence for drugs offences. He had made significant progress in his rehabilitation by securing a job and re-establishing his family relationships.

However, a few months after his release he was informed by the police that he was the subject of a Threat to Life notice. As such, it was deemed that there was a real and immediate threat to his life, but he was told no more. The defendant assumed that the threat emanated from a £250,000 drugs debt where he had refused to be used as an intermediary. In the following weeks both he had his partner received sinister calls and visits to their workplace.

The police received intelligence that the defendant had obtained a firearm and armed officers executed a search warrant at his family home in the early hours of the morning. When they searched the property they did indeed find a fully working firearm with four live rounds loaded in the magazine ready to be fired. The defendant already had two previous convictions for possession of firearms and the jury was aware that he had been in prison and released on licence. The prosecution submitted that the intention of anyone who has a firearm loaded and ready to be fired could really only be for one thing – to shoot someone if and when required: the defendant had been threatened and that may well be the reason he armed himself with a loaded gun to extinguish the threat.

The defence was able to exclude incomplete telephone evidence, as well as question the investigation and the manner the police adopted in issuing the Threat to Life notice. The defendant maintained from the outset that he had never intended to harm anyone but simply to brandish the weapon if the need arose to scare someone away. He was acquitted. 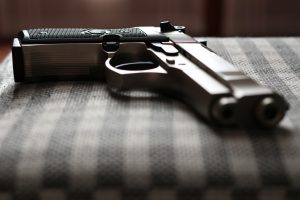