A delegation from the Sentencing Guidelines Committee of Uganda visited London from 20-24 May 2019. The sentencing benchmarking visit, headed by the Honourable Principal Judge Dr Yorokamu Bamwine, was funded by the Rule of Law Expertise UK (ROLE UK) and the Ugandan judiciary. The visit was organised by Evolve – Foundation for Legal Assistance (‘Evolve’), who also hosted the Committee during their time in the UK. 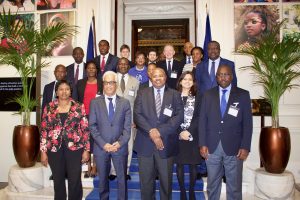 In 2013, it was determined that the judiciary of Uganda would be assisted by the creation of sentencing guidelines to promote fairness, transparency and consistency in the sentencing of criminal cases.  The Sentencing Guidelines Committee was therefore created in order to oversee the implementation of the guidelines and to make proposals for their reform.

Guidelines were produced for the High Court in 2013, and the Committee has since made proposals for the development of further sentencing guidelines for the magistrates’ courts.  The Committee has representation from each area of the criminal justice sector in Uganda. Its members are in the process of initiating potential sentencing reforms in furtherance of a sentencing policy for Uganda.

As part of the Committee’s important work on reform and development its members were invited to the United Kingdom by Evolve, a criminal justice development organisation that provides expert legal assistance and advice to a range of stakeholders in Uganda on a pro bono basis.  Evolve has worked with the Ugandan judiciary for several years in a number of capacity-building and reform activities in the criminal justice system.

This visit was another element of the partnership activities between Evolve and the Ugandan judiciary in the area of sentencing reform. The purpose of the visit was to examine the perspectives, experiences, and evidence of sentencing issues in the jurisdiction of England & Wales.  The visit was also designed to enable the Committee to share their experiences and learning with their counterparts in the UK, and give an opportunity to found durable lines of communication for mutual exploration, assistance and exchange in the future.

On the first day of the programme, the delegation attended the Supreme Court of the United Kingdom, where the delegation was able to discuss matters of sentencing with Lord Lloyd-Jones and Lord Reed.  The delegation heard about the experiences of the Privy Council, which acts as the final court of appeal for a number of Commonwealth nations, and also about the challenges raised by complex sentencing legislation in England & Wales.  They also heard from Professor David Ormerod QC – a deputy High Court judge and the Law Commissioner for criminal law since 2010. Professor Ormerod spoke about the new Sentencing Code which contains all of the law on sentencing procedure. The delegation was hosted at the Supreme Court for lunch, where they were also joined by Lord Briggs and Lord Kitchin.

After their meetings in the Supreme Court, the delegation met with senior officials from the UK’s Serious Fraud Office, where the operational relationships between investigators, prosecutors and the criminal justice system were considered.

On the second day the delegation attended the offices of the Solicitor-General for England & Wales.  The Solicitor-General of Uganda, Mr Francis Atoke, was one of the first to meet his newly appointed counterpart, Ms Lucy Frazer QC.  The meeting included a comparative review of the role of the Solicitor-General in overseeing consistent sentencing, and involvement in appeals against unduly lenient sentences. The delegation then met Mr Robert Neil MP, Chair of the Justice Select Committee who spoke about the Committee’s role in providing feedback on draft sentencing guidelines.  In the afternoon, the delegation attended the commercial courts to discuss the deepening of judicial international ties with the chair of the International Training Committee of the Judicial College, Mr Justice Knowles, and Dr Karen Brewer of the Commonwealth Magistrates’ and Judges’ Association.  The day concluded with a final meeting with representatives of the Sentencing Council of England & Wales to consider the methodology of researching and structuring and producing sentencing guidelines.

The third day began with a fascinating talk with leading international lawyer Edward Fitzgerald QC and Amanda Clift-Matthews of the Death Penalty Project.  The delegation was able to raise a range of topics arising from the case of Attorney General v Kigula and 417 others, in which the Supreme Court of Uganda held the mandatory death penalty to be unconstitutional.  The meeting included the shared experiences of a number of jurisdictions facing similar challenges to Uganda, when dealing with issues of sentencing the most serious criminal offences.  Discussion also covered the challenges of balancing the objectives of punishment, deterrence, public protection, reparation and rehabilitation.

The delegation were later hosted for lunch by the Commonwealth Secretariat, following a productive meeting with the new deputy secretary-general Dr Arjoon Suddhoo and other staff at the secretariat.  The lunch took place in at Gray’s Inn Hall.  The delegation then moved on to the Royal Courts of Justice, where they met with Ms Sheridan Greenland, the executive director of the Judicial College, to discuss training of judges in England and Wales.  Later in the afternoon, the delegation heard from senior members of the Sentencing Council of England & Wales, Mrs Justice Maura McGowan QC and Lord Justice Holroyde, regarding the effects of sentencing guidelines on judicial practices.  The group were then joined by Sir Brian Leveson, President of the Queen’s Bench Division, who related some of the experiences in England & Wales of procedural reform to improve efficiency in the justice system.

On the fourth day, the delegation returned to the Royal Courts of Justice to meet with representatives of the UK’s Department for International Development to discuss ways in which the UK might support the work of the Sentencing Committee and the development of the Ugandan justice system.  Ms Fuschia Allen then joined the delegation to discuss the operation of the National Probation Service in England & Wales, and the delegation were able to raise matters about the role of Probation in sentencing offenders.

In the afternoon, the delegation were hosted by the most senior criminal trial judges in England & Wales, at the Old Bailey.  The delegation were joined for lunch by the Old Bailey judges before observing proceedings in an inquest on a terrorism case, before watching some of the country’s most talented barristers conduct sentencing hearings before Her Honour Judge Munro.  It was a useful opportunity to see the sentencing guidelines in action, and assess the differences and similarities across the jurisdictions.

Following the mock hearings, Her Honour Judge Molyneux of the Old Bailey and Mr Martin Jones, chief executive of the Parole Board, conducted a helpful conference on the way in which those sentenced to very long terms of imprisonment are assessed for suitability for release, depending on whether they have reformed, developed an understanding of the causes of their offending, and no longer pose a threat to the public. On the evening of 23 May 2019, the Uganda High Commissioner to the UK, His Excellency Julius Moto, hosted a dinner for the delegation, the Evolve team and other guests at Uganda House, London.

On the final day, the delegation met with officials at the Ministry of Justice to discuss to sentencing policy.  The discussions included how data can be analysed to allow assessment of trends and rate of reoffending.  After this meeting, the delegation engaged with Max Hill QC, the Director of Public Prosecutions.  This was a valuable chance for the attendees to review the role of prosecutors in sentencing.

Lunch was hosted by the Advocacy Training Team of Middle Temple at Middle Temple Hall.  After consideration of training and mentoring lawyers to better assist judges in sentencing, the delegation were hosted at the First-Tier Tribunal (Immigration and Asylum Chamber) to meet with senior judges.  The discussions encompassed the range of legal issues and complexities that judges must contend with to ensure that there is always a fair hearing, and just results.

The visit was of great use to the delegation, and also to each of the representatives, officials and judges that had hosted the meetings in the UK.  Following the events, the Sentencing Committee of Uganda resolved to expedite its review of the current sentencing guidelines, and the completion of the guidelines for magistrates’ courts.  The Evolve team will assist in the facilitation of technical experts to assist in the revision process.  The committee seek to build capacity of a dedicated statistical unit, and data collection processes to support the Committee and the judiciary.  Evolve will conduct further research into the experiences of other jurisdictions, particularly on the issue of life sentences.  This would assist the committee’s proposed consultation with various stakeholders in the justice system on life sentencing options, with a view to clarifying the legislation in this area.  There is to be similar research and reviews of developing probation services, as well as consideration of a system of parole.  Finally, the committee will work with stakeholders to refine sentencing policy, taking into account efficiency, procedure and scope for future development. 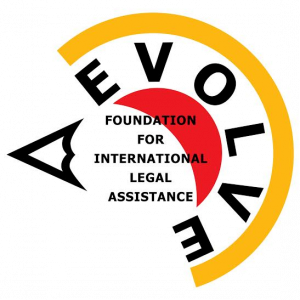